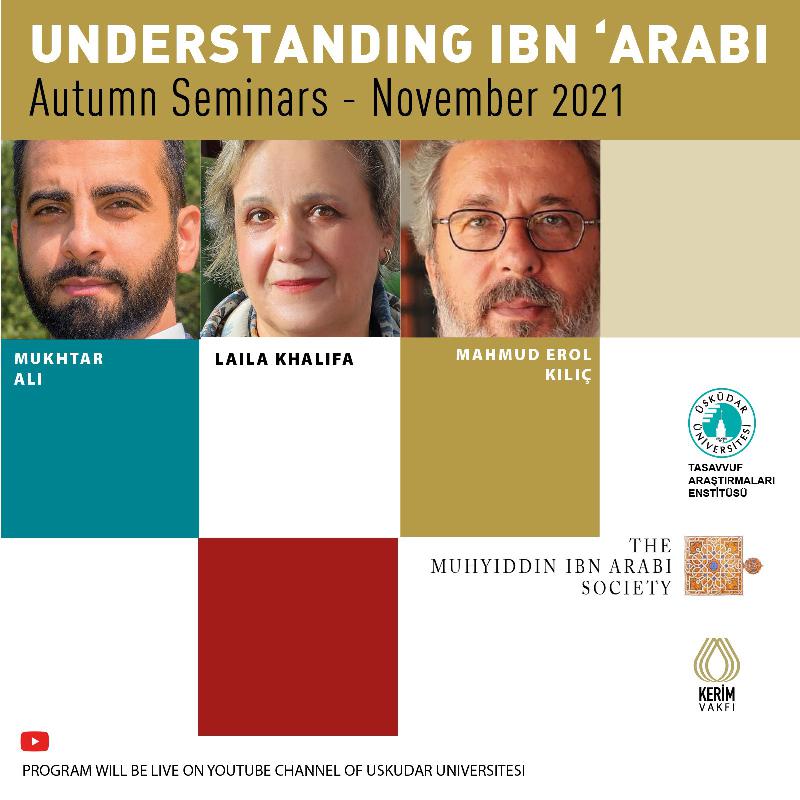 "Understanding Ibn Arabi" Autumn Seminars will be ended with the Closing Panel, November 27, Saturday at 20:00, moderated by Kerim Guc. The Closing Panel will be chaired by Mahmud Erol Kılıç (IRCICA General Director).  Laila Khalifa (Amman, Jordan), Mukhtar Ali (University of Illinois Urbana-Champaign, USA) and Cemalnur Sargut (Üsküdar University Advisor to the Rector) will attend to the panel as the speakers.

The program will be broadcast in Turkish, English and Arabic in the form of simultaneous translation on youtube channels at the following.

and the Institute for Sufi Studies at Üsküdar University, in collaboration with the

The series will consist of four seminars on consecutive Saturdays.

The final session will be a panel discussion, bringing the speakers together to discuss and develop the theme.

All sessions will include an opportunity for questions so that attendees can fully participate.

Mahmud Erol Kılıç is a Professor of Sufi Studies. His numerous books, articles and translations have focused on Ibn ‘Arabi and the Ibn ‘Arabi school of thought as well as Sufism in Anatolia. He has been the ambassador of the Republic of Turkey to the Republic of Indonesia, and was the Secretary General of the Parliamentary Union of the OIC Member States (PUIC) based in Tehran. Prof. Kılıç currently serves as the Director General of the Research Center for Islamic History, Art and Culture. He is an Honorary Fellow of the Muhyiddin Ibn ‘Arabi Society.

Mahmud Erol Kılıç writes: ‘Ahmed Avni Konuk (d. 1938) was a Sufi, musician, and composer with the masterful approach of applying his Sufi experience within the Mawlawi Sufi path to his work in the state postal service. Following a voluminous commentary on the Masnavi (considered one of the most comprehensive commentaries made in Turkish), he also wrote a commentary on Ibn ‘Arabi’s Fusus al-Hikam. This commentary serves as a key to Ibn ‘Arabi’s main ideas and concepts; the introduction in particular is almost a summary of the entire Akbari system of thought. What is even more interesting about Ahmed Avni Bey, however, is that his vision did not separate Mevlana and Ibn ‘Arabi, but rather explained one through reference to the other – an approach that brought together the two figures of Mevlana and Ibn ‘Arabi like pieces of a puzzle, to present a unified understanding of two traditions’.

Laila Khalifa (Ph.D) began her studies in social sciences and history at the University of Jordan in Amman. Later she pursued postgraduate research in Social Psychology at the University of Nottingham, UK in 1985. She was awarded her MA in Classical and Modern Islamic Thought at the Sorbonne in 1988. She has subsequently dedicated her research to the study of Ibn ‘Arabi’s doctrine and received her Ph.D. in 2000, in History and Civilisation at the L’École des Hautes Études en Sciences Sociales.

Laila Khalifa writes: ‘The writings of Muhyiddin Ibn ‘Arabi are among the most important to have been written in the gnostic knowledge. Ibn ‘Arabi’s writings connect human civilization extending from Adam – peace be upon him – to Prophet Muhammad – may God bless him and grant him peace; in other words from the beginning of creation standing in the day of the covenant before God, to the day of return and finally standing before God, Glorious and Most High, and asking for intercession. Ibn ‘Arabi divulges the divine, spiritual, and legal secrets in the rulings in fiqh and shari’a that came with canonical language, supported by openings (fath), discoveries (kashf), and divine self-manifestation (al-tajalli al-ilahi). Specialists in this field agree on the importance of these books, as well as on the difficulty of reading them. In this seminar, I will elucidate some of the problematic issues as well as the essential points that need to be understood when it comes to the study of Ibn ‘Arabi’s school of thought, in the realm of gnostic knowledge and spiritual fiqh.’

Mukhtar H. Ali (Ph.D) (2007) University of California, Berkeley, is a Lecturer in Islamic Studies at the University of Illinois, Urbana-Champaign. He specializes in Sufism, Islamic philosophy and ethics, but his areas of interest also include Arabic and Persian literature, Qurʾanic studies and comparative religion. He is the author of Philosophical Sufism: An Introduction to the School of Ibn al-ʿArabi (Routledge, 2021) and The Horizons of Being: The Metaphysics of Ibn al-ʿArabi in the Muqaddimat al-Qayṣari (Brill, 2020).

Mukhtar H. Ali writes: ‘This talk explores the writings of Dawud al-Qaysari (d. 751/1350), the preeminent commentator of Ibn ‘Arabi’s works. Qaysari’s introduction to his commentary on the Fusus al-Hikam – popularly known as the Muqaddimat al-Qaysari – is a masterpiece of Sufism that distills in clear and precise language Ibn ʿArabi’s entire metaphysical worldview. As such, it is a foundational, introductory text in the school of Ibn ʿArabi, elucidating the key doctrines of Philosophical Sufism: Being, the divine attributes, the universal worlds, the imaginal world, unveiling, creation and the microcosm, the perfect human, the origin and return of the spirit, prophethood and sainthood.’

Hasan Kerim Güç is a Ph.D. candidate at the Institute for Sufi Studies, Üsküdar University, Istanbul. His studies include Sufism and the thought, history and Islamic literature of the Ottoman period. He worked in Virginia, USA, in software engineering between 1999-2010. He is currently the Managing Director of Nefes Publishing (Nefes specialises in books on Islamic texts and Sufi studies. It also includes the Tuti imprint, which specialises in popular science).

He is a founding and board member of the Kerim Foundation and is the author of Ken’an Rifai’nin Dervişlik Anlayışı (Kenan Rifai’s Understanding of Dervish) (Nefes, 2020) and The Birds of Attar (Nefes, 2021). He has also published translations of philosophical classics.

Forms
Activity Report
WHATEVER’S ON YOUR MIND about our University, ask us!